Wild Turkey has announced a new spirit created by acclaimed Master Distiller Eddie Russell called Master's Keep Cornerstone Rye, which is the fourth installment of their Master's Keep series. This is the oldest rye ever released by Wild Turkey coming in as a mixture of barrels aged between 9 and 11 years. 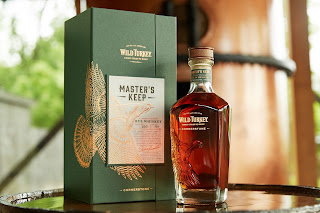 
Wild Turkey was one of the few legacy distilleries that remained loyal to crafting Rye even as vodka and gin became the new, hot thing. Cornerstone Rye celebrates our continued commitment to the grain. As my own son Bruce has reminded me given his devotion to rye in working with the bartender community, it's a fundamental part of our history

This is a very limited release, but at that price point, if you are interested, you should be able to find some fairly easy. This seems like it would be a great candidate for the bottle lottery that the OHLQ has conducted the past two winters. In terms of interest, I feel there are a lot of cheaper ryes at or around that age that would be a better value (Whistle Pig, Redemption High Rye, etc.). However, if you are a Wild Turkey fan, then this could be a great new product for you.

If anyone sees this in the wild or gives it a taste, drop a note in the comments below.