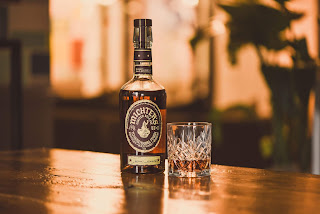 This new whiskey is started with fully matured barrels of Michter's US*1 Sour Mash Whiskey. It is then transferred into specially toasted barrels for additional aging. Michter's President Joseph J. Magliocco states:


We've been very happy with how our Toasted Barrel Bourbon and Toasted Barrel Strength Rye releases have come out, and we discovered that our Sour Mash Whiskey is also wonderful for toasted barrel finishing.

In terms of the cooperage, the first barrel is a fire-charred, new American white oak barrel. After the whiskey is matured, it is then handed off to a second barrel that is toasted (rather than charred) and made from 18-month air-dried wood. The difference between toasted and charred is charred looks like wood from a campfire and brings flavors associated with caramel and honey whereas toasted are heated more gently and resemble the burn on a piece of toast and are associated with vanilla and spice flavors. The Whiskey Wash has a full write up if you would like to learn more.

This new Michter's comes in at 86 proof (43% alcohol by volume) and has an MSRP of $60 for a 750ml bottle. It is a limited release and comes with the following tasting notes:


Toffee and buttery vanilla notes up front with fragrant honey, milk chocolate, and a hint of orange peel. Mid-palate the toasty campfire notes appear and intensify the cherry and spice notes in this elegant whiskey.

I reached out to Michter's and they confirmed they are working with the State of Ohio on this release. I'm a big fan of trying new methods to create unique whiskeys. This seems like a great implementation of this and comes in at a fair price. While we haven't reviewed any Michter's yet, we have a sour mash in the backlog that I'm looking forward to and this is one I'll be picking up if I see it on the shelves.

If you pick it up or give it a try, drop a note in the comments below.