Beam Suntory owned and Canadian based Alberta Distillers has announced a limited re-release of their Alberta Cask Strength Rye. This release is made in Calgary, Alberta and crafted with 100% Canadian prairie rye grains grown by local farmers and nutrient-dense, glacier-fed spring water from the Rocky Mountains. 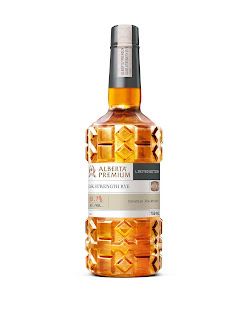 Following the success of Alberta® Premium Cask Strength Rye's debut in the U.S. last year, we are thrilled to offer stateside whisky drinkers the limited 2021 release of our award-winning whisky. When Alberta Premium debuted in 1958, we were one of the first distilleries to create a true 100% rye whisky, and this cask strength rye is the culmination of our hard work and dedication to crafting exceptional rye whisky.

The proof in the product release is listed as 63-67%, which I assume is meant to be the alcohol content, which would put the proof around 126-134. That makes much more sense for a cask strength release (cask strength means the alcohol isn't cut with water to reach a specific proof). It will be available starting in October in select markets.

The release comes with an MSRP of $74.99 and has the following tasting notes:

Taste: Exceptionally smooth with notes of caramel, vanilla and a hint of chocolate balanced with the spiciness of rye and black currant

Finish: Smooth and lingering with the complexity of spice, warm vanilla, and dark fruit

This product is showing on the State website so I expect it to be available in Ohio. In terms of the product, I'm not overly familiar with Canadian whiskey except for a lot of Crown Royal. For this release, I would have liked to have an age statement to show how long the whiskey was in the barrel before bottling. Having said that, $75 is within range for a cask strength release and the bottle looks cool enough. If you're a big Canadian Whiskey fan, this could be a great option.

What do you think? Drop a note in the comments below.