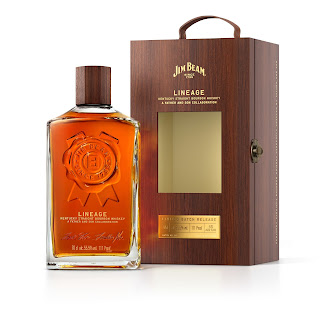 Lineage represents a significant moment in the history of Jim Beam. Not only is it a collaboration between the seventh and eighth generation of distillers in our family, but it's a blend of the past, the present and the future.

Lineage is a 15 year bourbon with a similar mouthfeel of Jim Beam. The bourbon is sold in a unique bottle with the Jim Beam seal prominently features. It comes in at 110 proof (55% alcohol) and carries a $250 MSRP. The tasting notes are: Notes of spice, vanilla and caramel, ensuring a balanced finish.

After doing this blog for almost two years and never seeing anything regarding global travel retail, this is the second release within a month that will be available exclusively at airports and duty free shops across the globe. Both of the releases were from Beam Suntory (the other being Ao) so this is clearly part of their brand strategy as global travel retail is a $75 billion dollar industry that is expected to double by 2025.

In reading between the lines, this release appears to be a 15 year version of Jim Beam bottled at a much higher proof, which makes it very intriguing. The price point is about where I would expect it too. It's a shame that this isn't coming to the States because this is a bottle and bourbon that is unique at a reasonable price point that would be great to have on display or bring out for special occasions.

What do you think? Let me know in the comments.